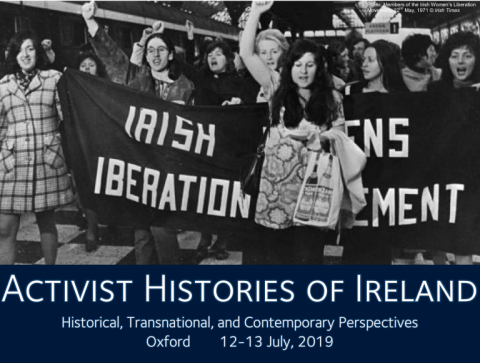 The term ‘activist’ was first used to describe groups in the early twentieth century, including Irish nationalists, who were active on behalf of Germany during the First World War, but consolidated its contemporary meaning during the countercultural revolutions of the long 1960s. Conceptually, however, ‘activists’ – those who lead or drive forward movements to enact political change – have played a central role throughout modern Irish history, and continue to do so today. One year after the repeal of the constitutional ban on abortion in Ireland, this two-day event seeks to draw together contemporary activists and historians to examine the networks, tactics, and trajectories of Irish activism and radicalism in the past and the present. It will offer the opportunity for reflection on both the historical context of Irish activism today, as well as the political and ideological roles of contemporary historical scholarship.

Until recently, a cursory appreciation of the grand sweep of Irish history has often suggested that social conservatism, and even collective passivity, were its most dominant and consistent themes. Yet histories of Irish activism and radical thought have frequently belied this tendentious suggestion, just as the determined efforts of contemporary activists do so today. Irish activism has played an outsized role in a global context too, the country’s extensive diaspora providing an important and often critical foundation for networks and personal affiliations between Irish activists and radicals at home and abroad.

This collaborative and extra-institutional event will provide the opportunity to examine the intersecting tactical strategies, ideological positions and social connections of Irish activism in the past and present. The event will adopt a broad conception of activism in order to avoid anachronism, and to enable delegates to interrogate, through an examination of social roles, tactics, and motivations, the very concept and place of ‘activism’ itself, both as it exists within and outwith the academy.

We welcome short abstracts on any aspect of this topic, historical or contemporary, including, but not limited to:

As well as presenting their work, we would like to invite all speakers, whether they consider themselves activists or historians (or both), to reflect on the reasons for their interest in their topic or work.

Please send an abstract of c.300 words, along with a short biography, to irishactivisthistories@gmail.combefore 15 March 2019. Papers should be no longer than 20 minutes.