The Second International and Revolutionary Marxism 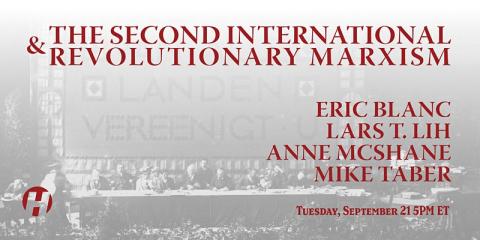 Join us for a discussion about the politics, promise, and reality of the Socialist International at the turn of the 20th century.

Join Mike Taber, Eric Blanc, Lars Lih, and Anne McShane for a book launch celebrating the release of Under the Socialist Banner: Resolutions of the Second International, 1889–1912, edited by Taber.

Recent years have seen a massive growth of interest in socialism, particularly among young people. But few are fully aware of socialism’s revolutionary history. For this reason, an appreciation of the Second International—often called the “Socialist International”—during its Marxist years is particularly relevant.

What is the record of the Second International in its Marxist years? What is its legacy, and what lessons does it offer for today? These and other questions will be discussed.

***Register through Eventbrite to receive a link to the video conference on the day of the event. This event will also be recorded and will have live captions available.***

Lars T. Lih is an independent scholar who lives in Montreal. He is the author of Bread and Authority in Russia, 1914-1921, co-author of Stalin’s Letters to Molotov , author of Lenin Rediscovered: What Is to Be Done? In Context , and co-editor, with Ben Lewis, of Zinoviev and Martov: Head to Head in Halle . He has also authored a short biography entitled Lenin . At present, he is working on a study of the 1917 revolution that brings out the overlooked role of consensus and continuity in the Bolshevik outlook.

Mike Taber is the editor of Under the Socialist Banner: Resolutions of the Second International, 1889–1912. He has edited and prepared a number of other books related to the history of revolutionary and working-class movements—from collections of documents of the Communist International under Lenin to works by figures such as Leon Trotsky, Malcolm X, and Che Guevara.

Anne McShane has been involved in Marxist politics for over 30 years. She has a particular interest in the struggle for women’s emancipation within socialist projects and has completed a PhD on the role of the Zhenotdel (Women’s Department of the CPSU) in Soviet Central Asia. She works as a human rights lawyer in Ireland.

This event is sponsored by Haymarket Books. While all of our events are freely available, we ask that those who are able make a solidarity donation in support of our important publishing and programming work.