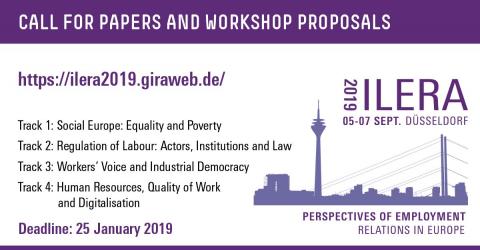 The XII European Regional Congress of the International Labour and Employment Relations Association (ILERA) will take place in Düsseldorf on 5–7 September 2019 and intends to explore the changes in labour and employment relations across Europe and in a comparative perspective.

Stable labour relations and welfare state protections have been perceived to be at the core of what has been named the European social model. Beginning in the 1990s, however, their foundations seem to have been weakened in many countries: We witness a decline in bargaining coverage, employer and union densities but also many efforts to restructure the welfare state as well as systems of labour market regulation. The 12th ILERA European Congress comes at a time when changes of institutions, actors and practices of labour relations are widespread. We expect recent current events such as the digitalisation of the economy, intensified conflict on trade, the exit of the United Kingdom from the EU as well as the vastly changing political landscape which comes along with the rise of right-wing populist parties to influence such changes in various ways. For good or bad, industrial relations will not remain the same. We invite participants to contribute towards analysing the direction, content and speed of such processes of change but also the current state of labour relations in Europe and beyond. We are particularly interested in receiving paper proposals which engage in research on how societal actors seek to actively shape labour relations, institutions, processes and outcomes.

Papers and workshops addressing the multi-faceted issues outlined above are welcome. In particular, proposals can refer to the following four tracks:

The idea of Social Europe is widely associated with strong labour market institutions and employment relations which largely contribute to comparatively high levels of social protection and low inequality. Trust in European institutions and the commitment to build a better future are not necessarily taken for granted as the rise of populist parties in many European countries seems to challenge the European idea. In addition, during recent decades Europe has been faced by growing social and economic disparities both within and between regions and states but also by persistent gaps between sexes as well as between migrant and native workers. Although the reasons for growing inequalities are complex and manifold, changes in labour market institutions and the power relations of the social partners are widely regarded as one major cause for this development.

The regulation of labour is a dynamic process subject to power relations in public policies and collective bargaining. This track aims at gathering contributions on the policies, the practice and enforcement of labour legislation and collective agreements.

The past decade has seen a growing impact of the supranational level as European policies have aimed at influencing labour and employment policies in the member states. Simultaneously, at member state level, nationalist political parties with divergent policies on labour institutions but similar opposition to foreign workers have grown. This happens against the background of a declining membership strength of trade unions and employer organisations, policies promoting a decentralisation of collective bargaining and opposition to the IR system by digital multinationals.

Europe is the origin of a rich variety of different concepts of industrial and workplace democracy. For decades the incompatibility of these traditions was more an obstacle than a fertile ground for a strong European representation of workers’ voice. Meanwhile considerable progress has been made regarding workers’ participation in Europe as well as beyond. Yet democracy is threatened at different levels and from different sides, in particular by the rise of authoritarian political movements and new forms of racism, sexism, classism and religious fundamentalism that also affect workplace relations. At the same time new technologies lead to new challenges as well as opportunities for democratic participation. Against this background we want to discuss the future of democratic participation at local, national, European and international levels.

We welcome papers on:

HRM is a continuously changing practice – not only in the firm, but also in inter-organisational relations between firms or between firms and (self-employed) individuals. As a consequence, we experience a massive change in practices of HRM, in the respective constellations of actors in HRM and employment relations. A growing digitalisation of (multinational) firms as well as their business relationships, new business models based on digital technologies (e.g., crowdwork) leading to a “Gig economy” and the use of artificial intelligence impacts on the quality of work, HRM practices and employment relations.

Under this track, we welcome empirical, theoretical as well as comparative papers and workshops on, for example:

We are also looking forward to papers which discuss these topics with reference to gender, migrant and disabled workers.

Abstracts are invited for submission through the congress website at:
www.ilera2019.giraweb.de/abstract-submission

Abstracts for a paper should have up to 1000 words.

Abstract for a workshop proposal should include:

Deadline for abstracts: extended to 25 January 2019

Notifications of acceptance will be sent by 28 February 2019

Registration for the Congress will start on 31 January 2019