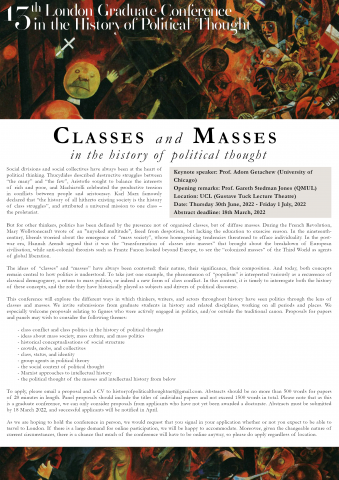 The 13th Annual London Graduate Conference will explore the theme of ‘Classes and Masses in the History of Political Thought‘.

Social divisions and social collectives have always been at the heart of political thinking. Thucydides described destructive struggles between “the many” and “the few”, Aristotle sought to balance the interests of rich and poor, and Machiavelli celebrated the productive tension in conflicts between people and aristocracy. Karl Marx famously declared that “the history of all hitherto existing society is the history of class struggles”, and attributed a universal mission to one class – the proletariat.

But for other thinkers, politics has been defined by the presence not of organised classes, but of diffuse masses. During the French Revolution, Mary Wollstonecraft wrote of an “unyoked multitude”, freed from despotism, but lacking the education to exercise reason. In the nineteenth century, liberals worried about the emergence of “mass society”, whose homogenising tendencies threatened to efface individuality. In the post-war era, Hannah Arendt argued that it was the “transformation of classes into masses” that brought about the breakdown of European civilisation, while anti-colonial theorists such as Frantz Fanon looked beyond Europe, to see the “colonized masses” of the Third World as agents of global liberation.

The ideas of “classes” and “masses” have always been contested: their nature, their significance, their composition. And today, both concepts remain central to how politics is understood. To take just one example, the phenomenon of “populism” is interpreted variously as a recurrence of classical demagoguery, a return to mass politics, or indeed a new form of class conflict. In this context, it is timely to interrogate both the history of these concepts, and the role they have historically played as subjects and drivers of political discourse.

This conference will explore the different ways in which thinkers, writers, and actors throughout history have seen politics through the lens of classes and masses. We invite submissions from graduate students in history and related disciplines, working on all periods and places. We especially welcome proposals relating to figures who were actively engaged in politics, and/or outside the traditional canon. Proposals for papers and panels may wish to consider the following themes:

To apply, please email a proposal and a CV to historyofpoliticalthoughtnet@gmail.com. Abstracts should be no more than 500 words for papers of 20 minutes in length. Panel proposals should include the titles of individual papers and not exceed 1500 words in total. Please note that as this is a graduate conference, we can only consider proposals from applicants who have not yet been awarded a doctorate. Abstracts must be submitted by 18 March 2022, and successful applicants will be notified in April 2022.

As we are hoping to hold the conference in person, we would request that you signal in your application whether or not you expect to be able to travel to London. If there is a large demand for online participation, we will be happy to accommodate. Moreover, given the changeable nature of current circumstances, there is a chance that much of the conference will have to be online anyway, so please do apply regardless of location.